By engaging with our local and Western Australian artists, Vasse Village exudes a distinct vibrancy that reflects our culture and South West lifestyle. Take the time to stroll and observe the colourful array of art installations throughout Vasse Village.

You can also take a short walking tour of the history of Vasse, with a series of plaques along Napoleon Promenade depicting the origins of our modern village centre. Read more… 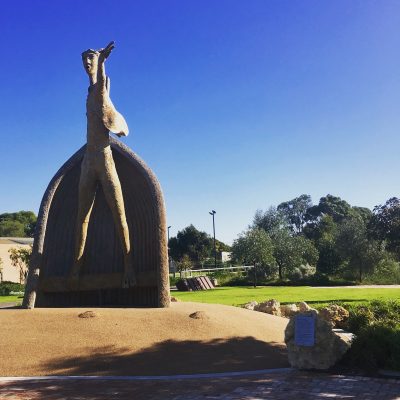 The Timothee Vasse artwork is designed to be an interactive attraction at the entrance to our village, commissioned by Artist Russell Sheridan and funded by the Vasse Joint Venture Partners as a gift to the Vasse community and those who visit.

Sheridan is an iconic Southwest artist who became prominently known for artwork that explores the “Australian larrikin”. His whimsical and warming style creates an engaging narrative to his sculptures, which you can find speckled throughout the Southwest region. 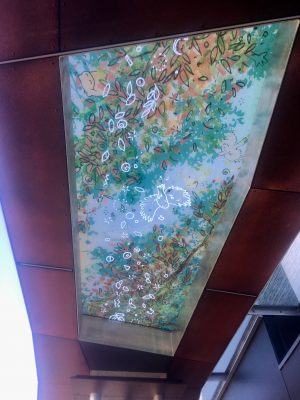 As you walk through the arcade canopy at Vasse Village, don’t forget to look up!

The artwork on the canopy represents the local area and adds to the vibrancy and sense of place that is so important to our Vasse community. The glass roof light-boxes within the structure are adorned with the artwork of local resident artist Ian Mutch and portrays local Marri and Peppi trees using aesthetic earthy hues and organic tones with subtle sketched birds and fauna integrated into the foliage. Using small sections of knock-out clear glass allows a trail on the ground below as direct sunlight shines through.

Ian is a South-West artist whose work often has a playful narrative and appreciation of nature. Mutch says he is inspired by his upbringing “surrounded by wild landscapes, animals and patterns”.

Titled Water View, this Peter Zappa commission is reminiscent of viewing a fish through water. Zappa selected the fish due to Vasse’s coastal location and feels – water, sun and fishing are synonymous with the region. 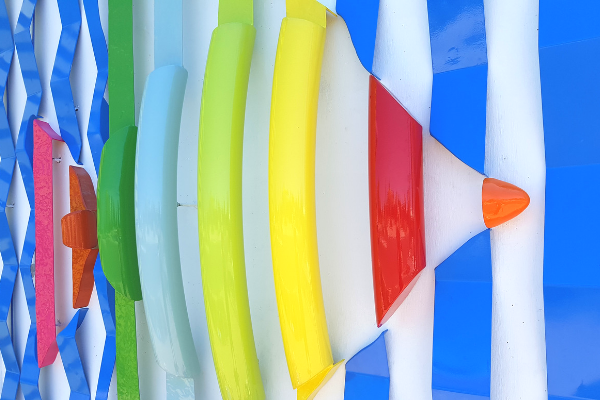 The design he says is meant to be “bright, fun, and memorable like a visit to the town of Vasse”.

Perth-based, Peter Zappa uses marine grade stainless steel and the traditional art of blacksmithing to create his pieces. His artworks often convey a narrative, make a statement and invite play between shadow and light. The elements appear to move as you walk towards or past the work, encouraging a depth of perception. This unique fabricated artwork can be found at the corner of Napoleon Promenade and Birak Lane.

Melski McVee was selected from a shortlist of artists to install a colourful 30m long mural on the northern wall of the building facing the Coles carpark. Melski is a Perth-based artist who works primarily in community art, murals, sculptures and illustrations.

Her mural at Vasse Village, Surrounded I See, celebrates the surrounding local flora and fauna, featuring Pink Eared Ducks, Galaxias Truttaceus, a Phascogale, a Red Capped Parrot, Holly-leaved Banksia and Flowering Gums. The mural was hand painted by Mel with help from the local community at a mural painting event late 2018. Her work is a celebration of what is locally beautiful and quintessentially Australian.

At 110 Napoleon Promenade, opposite Coles, local artist Jack Bromell was commissioned to complete some striking pieces to this central premises in the Village. The amazing mural depicting the face of a Calyptorhynchus Banksii or a Red-tailed Black Cockatoo is a showpiece on our main street. 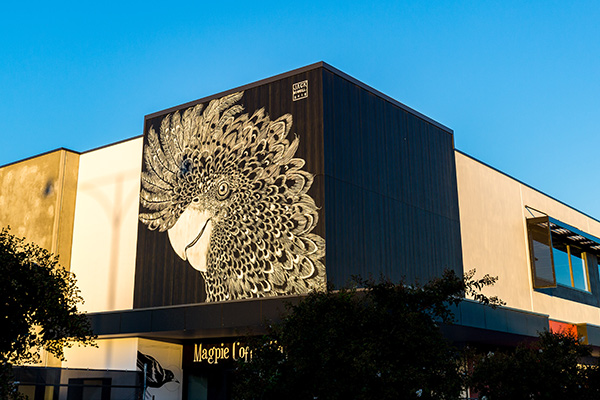 Installed over two days, the cockatoo is truly a masterpiece, further complemented by his Magpies and Kangaroo Paws that make a magnificent addition to the Napoleon Promenade streetscape.

Jack spent the majority of his childhood in the nearby coastal city of Busselton and much of his work is inspired by the nature, landscape and history of our unique South West region. You will also recognise Jack’s work on the Busselton foreshore with a large mural depicting the history of Busselton Jetty. 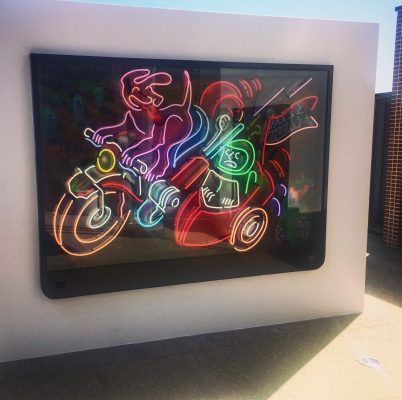 This Perth based street/graffiti artist is best known for art that looks like a neon light. But what’s intriguing, is that his art is usually created using just fluorescent spray paint and a clever technique.

It became a natural transition for him to start making graffiti art from neon lights. His commission for Vasse Village uses lights to make colourful graffiti-like art.

Straker, also known as The Muralist, is a master of illumination and his talent and creativity is clearly evident in this piece at the end of the Arcade in the centre of Vasse Village.

The Vasse Development Partners and City of Busselton commissioned these artworks for  Vasse Village through the Percent for Art Scheme.